You know these guys from somewhere, but you can’t quite put your finger on it. They are probably some late night movie you stayed up to watch for no good reason. Or maybe it was from your childhood when popping a tape in the VHS player was acceptable parenting. Or maybe something in the JCVD back catalog. No matter, you do know these guys: they are the Awesome Asian Bad Guys. Al Leong, Yuji Okamoto, Dante Basco, and George Cheung may not be household names, but they represent just some of the Asian American actors who have almost exclusively played bad guy roles in major Hollywood films of the 80s and 90s. These badasses fought McClane, Miyagi, Peter Pan, and Rambo, and would have smacked Long Duk Dong silly if they had the chance. Now these bad guys get sweet redemption as they team up with Randall Park and Tamlyn Tomita (Joy Luck Club, Karate Kid Part 2) to rescue Tamlyn’s twin sister “Pamlyn” from a notorious Los Angeles crime lord in this Asian American answer to The Expendables. Awesome Asian Bad Guys is a farcical comedy web-series-turned-featurette from the witty brains of filmmakers Patrick Epino and Stephen Dypiango, aka The National Film Society—a Youtube channel dedicated to filmmaking and pop culture. With Awesome Asian Bad Guys, Epino and Dypiango have zeroed in on a past Hollywood casting trend and flipped it for comedic effect by creating a completely refreshing work, while allowing us to revel in the Awesome Asian Bad Guy (or girl) in all of us. — AC 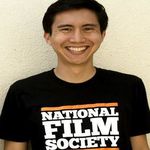 Patrick Epino is a Los Angeles-based filmmaker and University of Chicago graduate who earned his MFA in Cinema from San Francisco State University. He was selected by the film magazine, The Independent, as one of its “10 Filmmakers to Watch” for his first feature film, Mr. Sadman, starring Scoot McNairy and Tim Kang, about a 1990 Saddam Hussein double who loses his job and moves to Los Angeles to start his life over. Epino is also an alumnus of the IFP Narrative Labs and Film Independent’s Project:Involve. Stephen Dypiangco is an independent filmmaker who writes, directs, and produces narrative films, documentaries, and online video. His company the The National Film Society has been featured by The Wall Street Journal, GigaOM, and Angry Asian Man. As a producer of Marketing and Distribution, Stephen’s recent projects include the Oscar-winning short film God of Love and the feature documentary How To Live Forever. Dypiangco is an alumus of Georgetown University’s School of Foreign Service and NYU’s graduate film program.