Beyond Beauty: Taiwan from Above is the highest grossing documentary in Taiwan history and the first film that documents this region from an aerial perspective. The audience is taken on a bird’s-eye journey by helicopter across Taiwan’s various landscapes, with background music by award-winning composer Ricky Ho. The documentary describes the “beauty and sorrow” of Taiwan by juxtaposing awe-inspiring views of its rich biodiversity with images of industrial devastation wrought by humans.

Chi Po-lin, a veteran aerial photographer-turned-filmmaker, took tens of thousands of images of the island during helicopter trips over the past two decades. While it is not the film’s agenda to hold individuals or organizations accountable for the state of the environment, the film presents the undeniable reality of the damage and urges viewers to acknowledge the truth. It is a deeply disquieting wake-up call that garnered a pledge from President Ma Ying-jeou to begin work on many of the environmental problems highlighted in the film. — KE 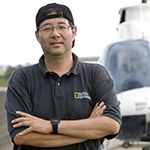