In 1990 George Bustamante (Joem Bascon) leaves his family in the Philippines and immigrates to Japan, and soon realizes that it isn’t easy living — and working — in a country where you don’t speak the language. Thanks to his friend, he lands a job in the hit sentai series Force Five. It’s the perfect setup where George doesn’t need to speak any lines, and as the masked Blue Force he can keep his bill-paying job a secret from his wife (Dimples Romana), who thinks that he has landed an engineering job as they planned.

Despite the theatrics of his profession, the soft-spoken George finds little thrill in fighting aliens and saving the world, especially when the world that matters is a thousand miles away. Little does he know that back home, his son Kiko (Jhiz Deocareza) has unwittingly chosen the Blue Force as his favourite action hero.

Blue Bustamante is a nostalgic flashback to a time of Japanese-superheroes and building-sized monsters, and a lighthearted and charming take on the traditional OFW (Overseas Filipino Worker) film. — KE 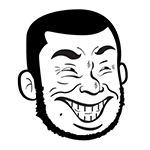