Jabya is a lot like any other adolescent boy—awkward, worried about his looks, and harbouring a huge crush on a classmate. Except Jabya comes from a Dalit family in rural Maharashtra who endures constant abuse from fellow villagers, who force Jabya’s family to deal with the villages’ wild pig problem and other degrading tasks.

While Jabya’s parents are resigned to their station in life, Jabya wants to break free by living the life any teenager should be able to have, including being able to express his feelings for his classmate Shalu. Desperate for a solution, Jabya resorts to a local legend that says one would be able to lift himself out of his caste status by capturing a black sparrow.

Marathi poet and director Nagraj Manjule draws upon his own experiences growing up in a rural, lower caste upbringing, where he struggled against the outlawed but very much alive caste system in order to gain opportunities for higher education.

On the surface, Fandry is a heartbreaking coming-of-age story; but what emerges is a searing indictment of India’s caste system that culminates in a climatic ending that is guaranteed to have you talking after the final frame. Fandry is a powerful and moving film that is not to be missed. — AC 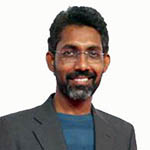 Born and raised in Karmala, a very small town in the Sholapur district in Maharashtra, Nagraj Manjule has closely witnessed rural India’s struggle for education. His First National Award winning short film Pistulva is a reflection of his experience, He has since pursued his masters in Marathi literature from Pune University and masters in communication studies from New Arts, Science and Commerce College Ahmednagar. He is one of the best and most important poets in Marathi literature in the last decade. His Damani-Literary-Award-winning collection of poems Unhachya Kataviruddha has received a very warm welcome from contemporary Marathi literature.