Hunter × Hunter: The Last Mission is the second film adaptation of the best-selling manga series Hunter × Hunter. The series follows young Gon and his friends who aim to pass the demanding tests to become a Hunter.

Gon and his friends, Killua, Kurapika and Leorio, go to see the Battle Olympia tournament at Heavens Arena. The arena is packed with spectators, including Hunters and VIPs, when there’s an unexpected raid by an armed group called the Shadow Squad, led by Jed. Some decades ago, Isaac Netero, chairman of the Hunters Association, sealed away Jed, who represented “shadow” of the association and had begun to make use of the “dark” power referred to as “On”. Now the Shadow Squad leader, Jed uses On mind force to seize Heavens Arena. He wants payback for the murder of his men by Netero and because the Shadow Squad had been ousted by the Hunter Association. Hunters Gon and Killua snap into action as they make their way up the arena against various opponents. Up on the roof, Jed is holding the chairman captive, forcing him to confront a dark truth that could unravel everything.

Since its serialization in 1998, the Hunter × Hunter manga has received much praise for its plot and character development. Introducing twists that even fans of the manga would find refreshing and darker than the previous adaptation The Phantom Rouge, The Last Mission is a satisfying treat for anime fans and casual moviegoers alike. — KE 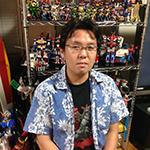 Keiichiro Kawaguchi was born in Kanagawa prefecture, Japan. Kawaguchi started his career as an animator in Production Reed. Since then, he has been involved in various animation projects such as Yu-Gi-Oh! Duel Monsters, NARUTO, and Sengoku BASARA.