The life of internationally renowned Filipino boxer Manny Pacquiao is the definition of a Cinderella Man story. He first entered the ring in the Philippines at the age of 16, with the goal of earning money to feed his family. Now, almost two decades later, the country of 100 million people comes to a complete standstill every time he has a fight.

Today, at the height of his career, Pacquiao is faced with maneuvering between an unscrupulous sport and political duties, while maintaining a personal life. The question now is: what bridge is too far for Manny Pacquiao to cross? Manny provides an in-depth look into Pacquiao’s life not only as a boxer, a superstar, a congressman, and a man of faith, but above all, a man. — KE 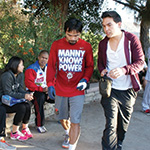 Leon Gast is an American documentary film director, producer, cinematographer, and editor. When We Were Kings, his documentary about “The Rumble in the Jungle”, the iconic heavyweight boxing match between Muhammad Ali and George Foreman, won the 1997 Academy Award for Best Documentary Feature and the Truer Than Fiction Award at the 12th Independent Spirit Awards.