The set-up seems familiar enough: Adi, an ambitious and self-righteous fresh-from-the-academy rookie cop gets paired with a grizzled veteran on a stakeout in search of Mumbai’s top hit man. However, once gun-drawn Adi corners the hit man in a rain-soaked alley way, Monsoon Shootout walks us through a series of different scenarios, while examining the effects of Adi’s choices and their consequences on everybody.

Featured in the Cannes Midnight program, Monsoon Shootout is an innovative and gritty cop drama with choose-your-own-adventure style twists that keep you guessing. The film features the familiar faces of Tannishtha Chatterjee (Siddarth), Geetanjali Thapa, and Nawazzudin Siddiqui (Bombay Talkies) as the brooding axe-wielding hit man. An international co-production years in the making, director Amit Kumar has given life to the conventional cop drama with style and flair. 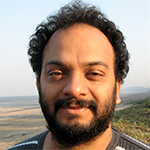 Amit Kumar graduated in film direction from the Indian national film school, FTII, in Pune. His short film THE BYPASS, produced under UK Film Council and Film Four’s Cinema Extreme series premiered at the Edinburgh International Film Festival. It won the Kodak BAFTA showcase, and was the UK entry for the Kodak showcase at Cannes 2004. Amit previously was Associate director to the BAFTA winning UK director Asif Kapadia on THE WARRIOR, and to the Oscar winning German director, Florian Gallenberger, on his debut feature, SHADOWS OF TIME. Amit’s World War II project, GIVE ME BLOOD, was selected for the NFDC Film Bazaar, the co-production market at the International Film Festival of India, Goa 2012.