Directed by Oh In-chun and starring Kang Ha-neul, this amalgamation of romance, humour, and horror introduces a new genre to the Korean film industry.

In-su suffers in fear from his ability to see ghosts. He decides to move back to his hometown to receive advice from his uncle, who is also tormented by the same special ability. However, the lingering spirits continue to invade In-su’s life in the midst of his bumpy adjustment to a new school, until he meets a girl. As the new friends get to know each other, In-su also learns that a mysterious masked ghost has started to haunt his classmates one by one. In-su feels obligated to investigate the ghost’s past in order to avoid more casualties and to release the ghost from its pains.

Through smartly peppered humour and plot twists, Mourning Grave paints the world of ghosts and spirits in a new light. Perhaps the antagonist is not the usual suspect, if there is even an antagonist at all. — JK 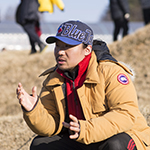 Director Oh In-Chun is a graduate of the Korean National University of Arts. After receiving considerable attention during the Cannes Film Market, Mourning Grave was sold to China, Hong Kong, Taiwan, Singapore and Mongolia, and set the record as the best-selling Korean title in Mongolia. This is Oh’s first feature film.