I heard my heartbeat:

I know this rhythm, warm, growing. The cadence of a poem remembering its own pentameter.

This is a popular chant in Iranian protests, taking its beat from the metric counts of Persian epic poetry.

The prosody leads the way this poem is read. The rhythm echoes thousands of people marching down the streets of Tehran. Bodies in synch, voices in tune – a crowd in climax. Rhythm mirrors heartbeats, then one beat united, a movement…protest…revolution.

Poetic, paternal, and harmonic. One voice shaped by thousands of bodies. A beat without an instrument to play it on. Occasional foot heels striking the ground, hands clapping to introduce a transition in tempo

They say history repeats itself; cyclical, monotonous and repetitive. Like chanting. A call for action and an abstraction, rising in collective objection with increasing fervor. Are they cultural weapons?

The medium is… The medium is… Meaning is not just words, but the material qualities of the language and the execution of action (sharp as knives).

Streets become stages, activists turn into actors. These repeated rhyming couplets shouted in a call-and-response format make use of common prosodic strategies such as internal rhyme and assonance.

We mimic each stressed syllable, internalize the prosody, and embody the segmentation of slogans. Our phonological awareness surpasses the ability to detect, segment, and manipulate the sounds in language. We are masters of rhythm, teachers of rhyme, poets of turmoil, and deliverers of the voice!

Translation, as a fundamental metaphor of our time, highlights the challenges posed through cultural, political, and linguistic fragmentation in a global setting.

Translation, a means of transcending crossing borders can also be the act of bordering. It can create common understanding while at the same time identifying key differentiators. These chants remain Farsi, while letting the performers be the translators, the actors, and the remediators. Meaning is derived not from the meaning of the words, but from the physical and material elements of the words.

The decades-long social revolution unfolding in slow bass percussion is one melody line.

“Because our societies have the illusion that they change quickly, because the past slips away forgotten, because identity is intolerable, we still refuse to accept this most plausible hypothesis: if our societies seem unpredictable, if the future is difficult to discern, it is perhaps quite simply because nothing happens. Except for the artificially created pseudo-events and chance violence that accompany the emplacement of repetitive society.”i

KHAAREJii explores the paradoxes within the act of translation as a mechanism that opens up a space between different cultures, while creating a space for misrepresentation and a border that sets dual settings such as source and target, center and periphery, local and foreign. It celebrates the impossibility and failure of translation and considers the alternatives in translation.

I See Jacques Attali, Noise: The Political Economy of Music, The University of Minnesota Press, 89-90

ii KHAAREJ in Farsi can be translated as: outside, foreign, out of tune/out of key (in music), outer, exterior, abroad, quotient (mathematics), and beyond. 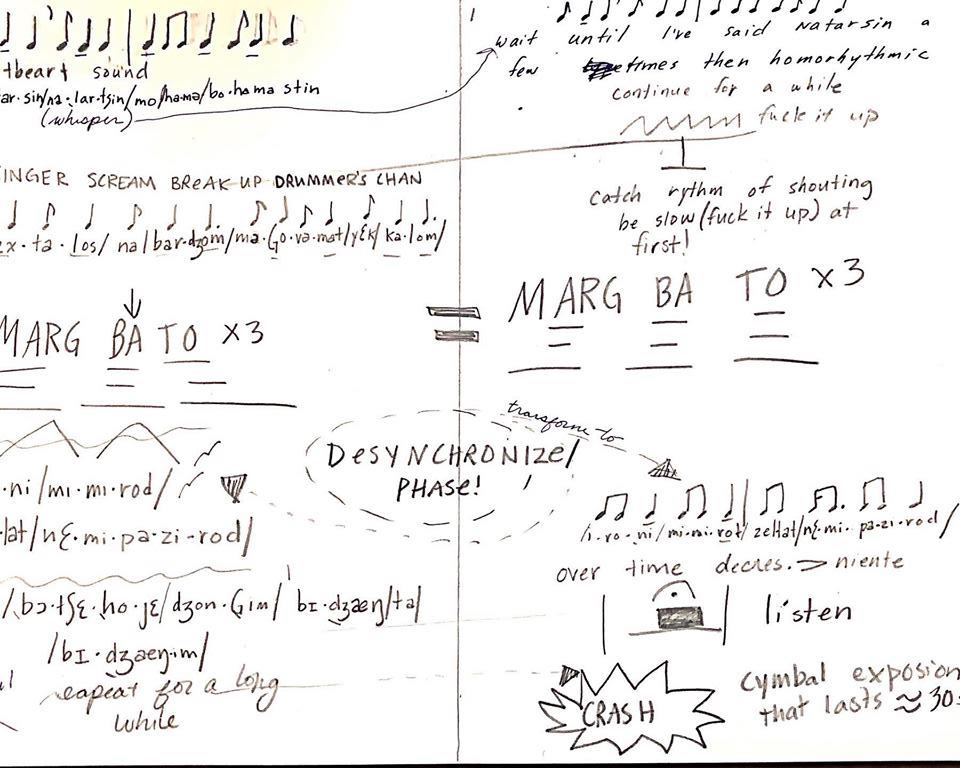 Join Sahar Te in a deep dive artist talk on her audio-visual practice that weaves in elements from literature, translation, sound, oral history, and theatre.